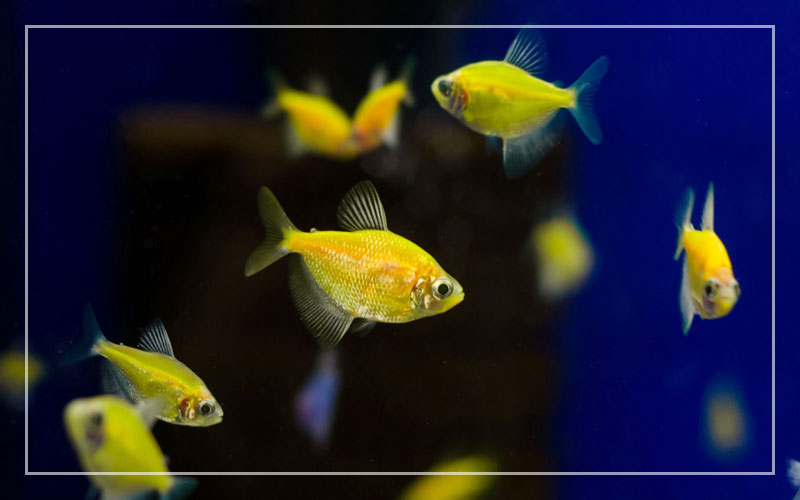 All aquarium fish species come in a multitude of colors, patterns, and body shapes and sizes. The coloring, however, represents one of the main attractions, causing most people to use this metric when choosing their preferred species.

Today, we will discuss the 10 yellow freshwater fish suitable for single-species and community tanks. You most likely heard of some of them, while others may be completely new.

Let’s start with the most notorious of them all. 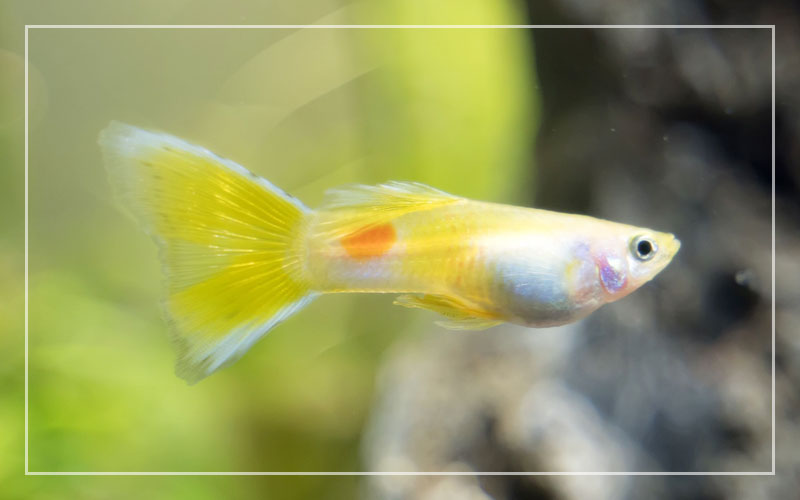 Guppies require no introduction; they’ve earned their reputation. Guppies are tropical fish, popular for their adaptability and high reproductive rates. They also come in an outstanding variety of colors and patterns, which is what earned them the name of ‘Rainbowfish.’

The yellow version is rarely clean. Yellow guppies display immense pattern variety as a result of decades of selective breeding. Some of them are so unique that we have bred them into completely new categories. Some of the most relevant yellow guppy options include: 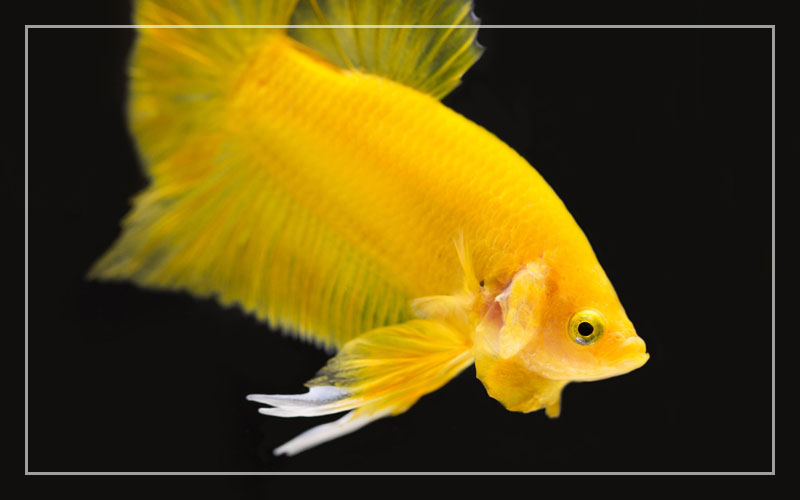 Bettas are famous for their exotic-looking fins, often making the fish appear twice as large. Bettas are almost as diverse as guppies in term of coloring and color patterns. You can find clean, single-color specimens or some exhibiting wild patterns with exotic combinations and shades.

Yellow Bettas can either display uniform yellow or showcase unexpected mixes with blue, purple, red, orange, and white. Bettas are adaptable fish and have undergone extensive selective breeding over the years. This means you can find an impressive variety of color patterns to select the one(s) that appeal to you the most. 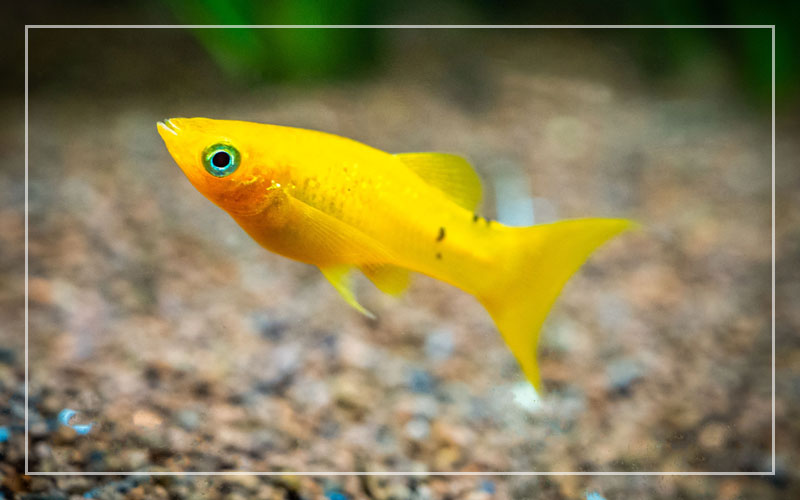 Thanks to their amazing color and pattern diversity, mollies make for another thrilling, adaptable, and diverse fish species. They are easy-going creatures and have adapted to life in captivity impeccably over the years. They require little maintenance, making them the optimal choice for novice hobbyists.

An adult Molly fish can reach around 4 to 4.5 inches in size, while other species can even go up to 6 inches. They are great for community tanks due to their peaceful demeanor and friendly personality. 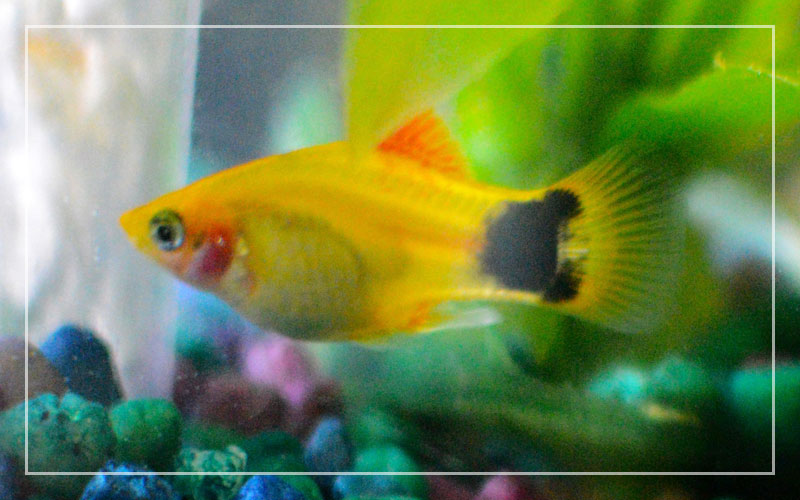 Platies are related to guppies, Mollies, and Swordfish since they all belong to the same Poeciliidae family. Their color and pattern diversity has led to the emergence of different categories of platies, separated by these metrics. Some notable names include the green lantern, the sunburst platy, the Mickey Mouse platy, and the dalmatian platy, but there are many others to consider.

They won’t grow more than 2.5 inches on average and prefer to live in groups of 10 or more individuals. This makes them ideal for community tanks, so long as their tank mates share their friendly and peaceful personalities. 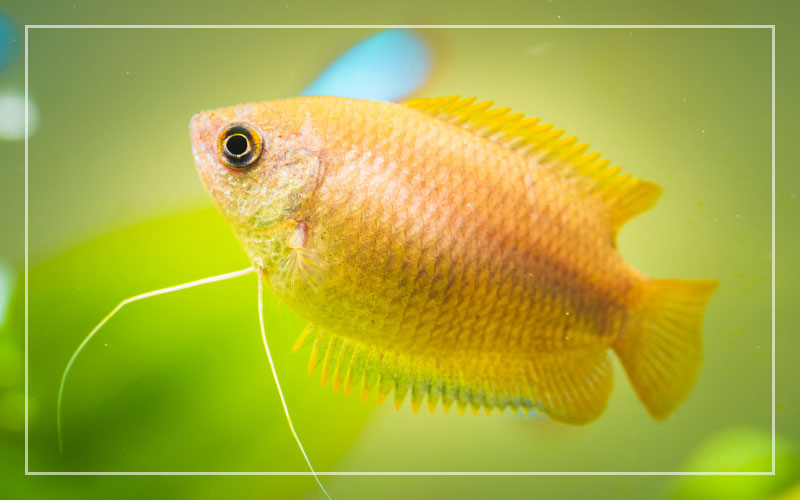 Honey Gourami or Sunset Honey Gourami is a 3-inch-long fish coming in an impressive variety of colors. This species is adaptable and friendly, making it ideal for beginners. The Honey version displays color variations but will typically remain in the same range – honey-like coloring varying between intense red to smooth gold and yellow.

You can easily identify the Honey Gourami by its long, thread-like ventral fins used to ‘sense’ the environment. Females can grow up to 2 inches, while males are slightly smaller but more agile and jittery. 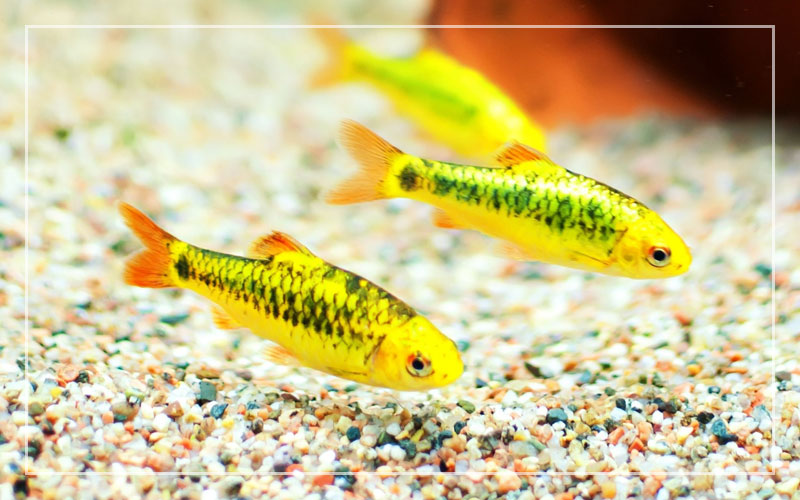 Gold barbs are aquarium world’s gold nuggets. There’s no other way to put it. They grow up to 3 inches and have stock and long bodies displaying reflective yellow with black patterns. Barbs are easy to maintain, and their peaceful attitude makes them ideal for community tanks.

It also doesn’t hurt that they share the same water conditions as many popular tank fish, including guppies. The ideal temperature revolves around 72 to 82 F, and they require a decent water current to stay comfortable since they come from fast-flowing streams. Other than that, they don’t need much so long as you provide them with quality food and ensure good living conditions. 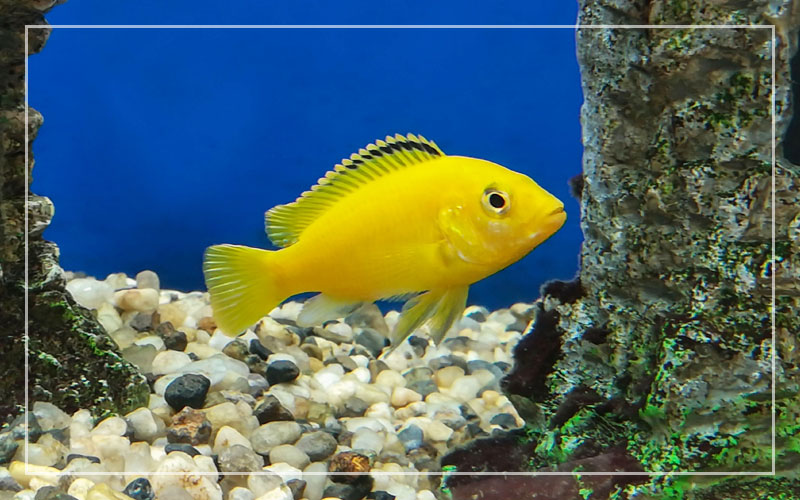 The Electric Yellow Cichlid is a natural predator and its overall look gives it away. The fish displays a long body with a big head and powerful jaws. This species is pure lemon-yellow with black or yellow ventral fins and a black stripe on its dorsal fin. Like all Cichlids, this species isn’t really a sweetheart; it displays a semi-aggressive attitude, especially towards more peaceful fish.

The Yellow Cichlid can grow up to 4 inches and live around 6 to 10 years in optimal conditions. You can keep several of them in the same tank so long as you limit the number of males and don’t pair them with smaller fish. You should ideally pair them with other Cichlids, preferably of similar size. 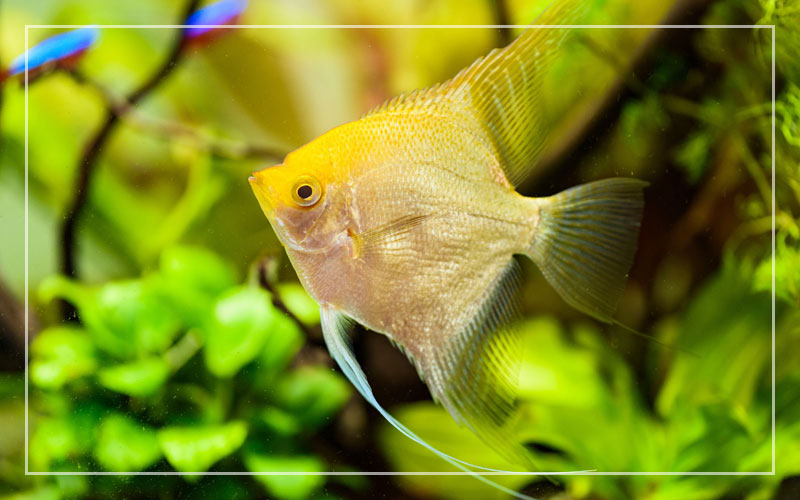 The Gold Angelfish is a staple in the aquarium world with an unmistakable look. The fish’s triangle-shaped body displays a pointy head, a stock and bulky conformation, and a sharp and long dorsal fin. The caudal fin is also short but displays 2 long and thin lobes. The ventral fins are also long and flaccid, resembling whiskers.

The Angelfish can display a variety of colors, including yellow, orange, light red, green, pearl-blue, or spotted variations. This species will grow up to 6 inches and, as a Cichlid, may display aggressive behavior more often than other fish. It is omnivorous, which is another way of saying that the Angelfish can eat smaller tank mates. 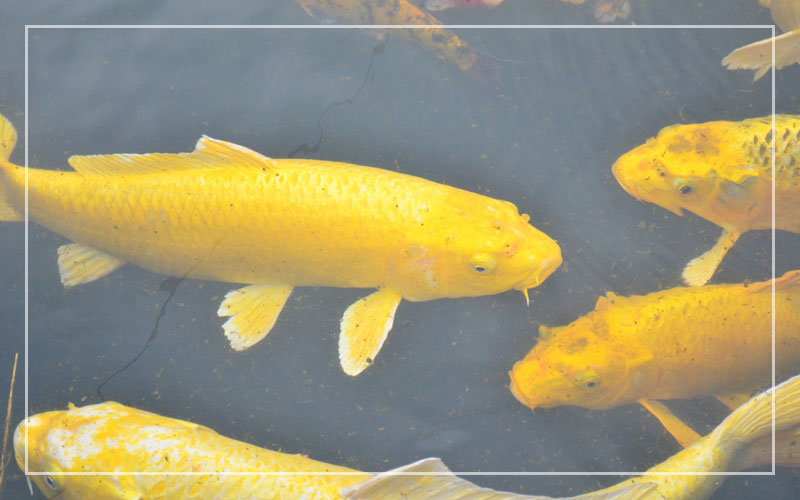 Few people haven’t heard of the famous Koi yet. This Japanese fish has made its way all over the Globe, becoming a staple in the pond and aquarium world. The Yellow Koi Carp can grow in excess of 20-22 inches and will display a long and powerful body with a big mouth.

The Koi can live up to 30 years in captivity, making them preferred fish for outside ponds due to their size, coloring, and personality. The Yellow Koi Carp may display different varieties of yellow, including pattern-based, mixed with black, red, orange, or other nuances. The fish is friendly and can grow to impressive sizes, which doesn’t make it a good fit for community tanks. 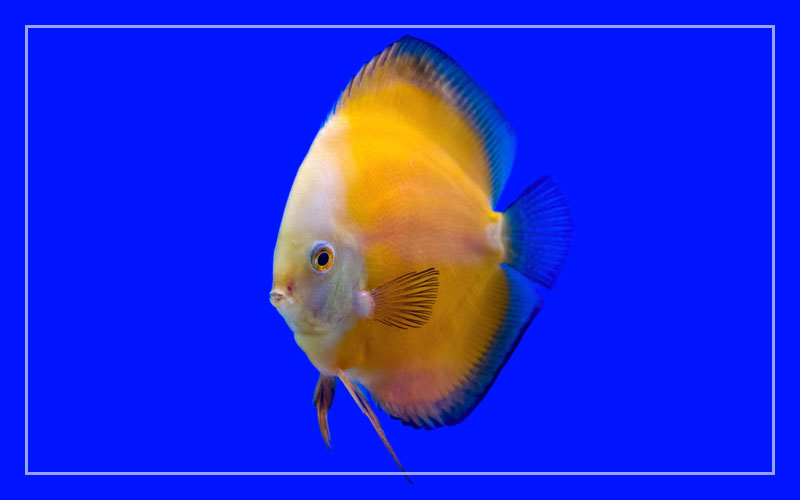 The Yellow Discus fish is shaped like a…disc. Few fish are as majestic as the Discus, especially when kept in groups. This species can measure around 8 to 10 inches and it’s notoriously difficult to care for. It’s only recommended to experienced hobbyists as they require more in-depth maintenance compared to other species.

The Yellow Discus Fish looks like a squashed lemon in terms of coloring and shape. It is almost round, displaying subtle color variations, including white and red stripes and spots. They also come in clean yellow.

If you’re looking to craft a single-color tank and yellow is your favorite, this list is a good suggestion to consider. However, you shouldn’t rely on colors-only, especially when creating community habitats with multiple fish species. Many species on this list aren’t compatible to one another.

Also, some species are not meant for beginners since they are more difficult to care for in the long run. Research each species accordingly and make smart choices. 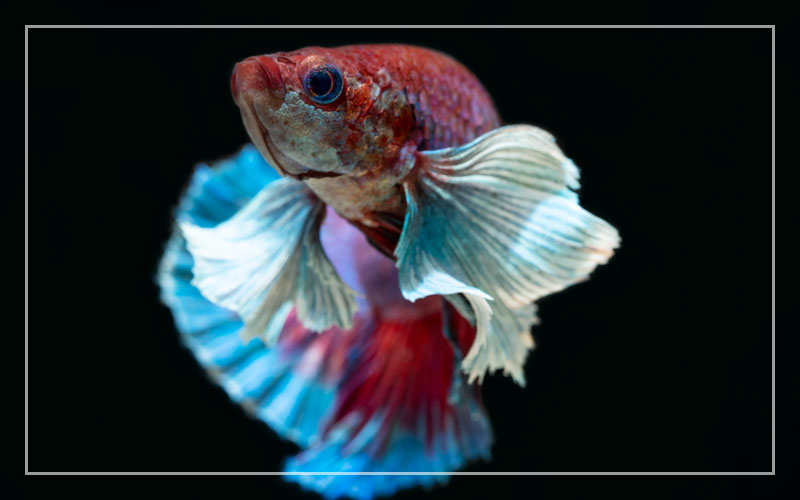 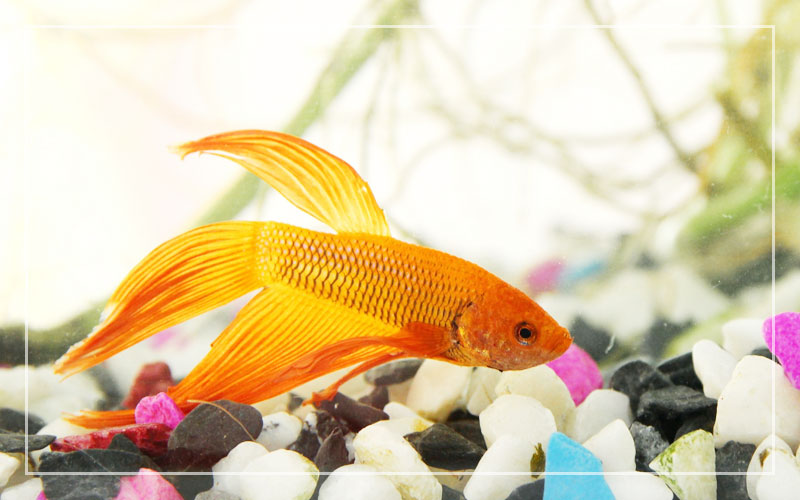 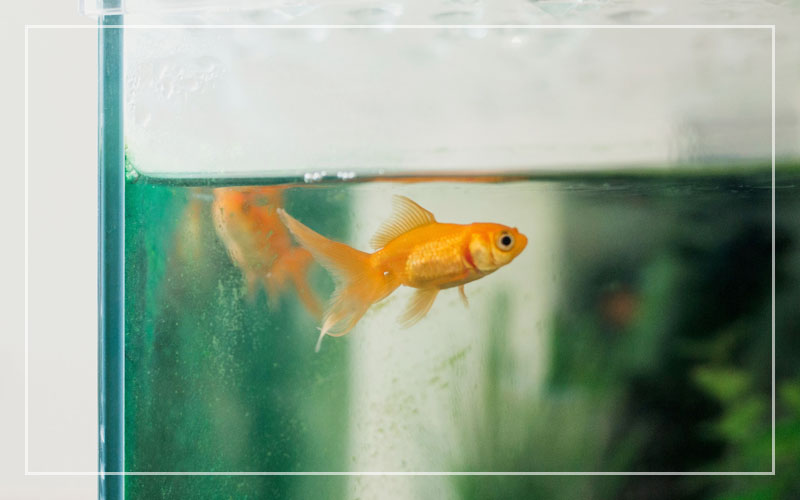