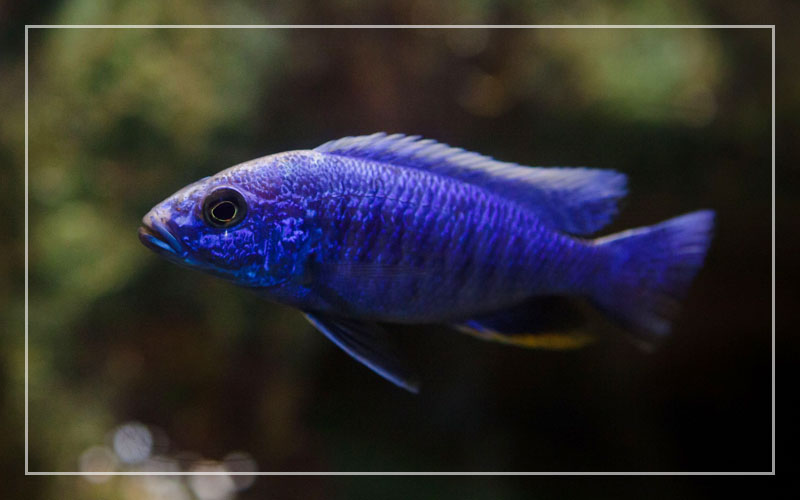 Blue is a color that wil occur rarely in the wild, which is why we tend to appreciate it that much more. As a future aquarium owner, you probably want to build the most aesthetically-pleasing aquatic environment, as close as possible to a natural habitat.

One of the perks of crafting your own aquarium environment is controlling what fish you can use. Whether you’re going for a single-species tank or a mixed habitat, choosing your fish’s coloring is essential for creating a visually pleasing aquatic enclosure.

Today, we will discuss the 10 most exhilarating species of blue fish that will truly bring your aquarium to life. 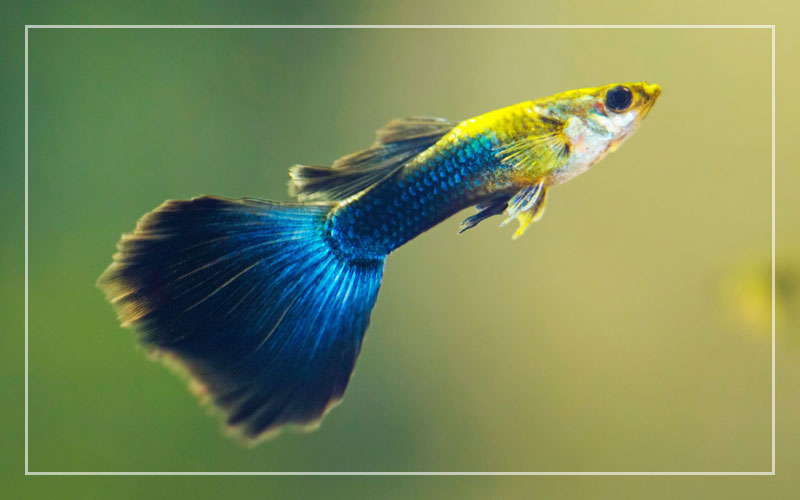 Guppies are tropical fish that have adapted to life in captivity better than any other species. They are fantastic breeders, capable of producing hundreds of guppy fry every month, and display an impressive variety of colors. Blue isn’t uncommon either, but certain varieties of blue are.

Guppies display an astounding diversity of colors and patterns, and the same stays true for blue guppies. Some of the most relevant blue guppies to consider include: 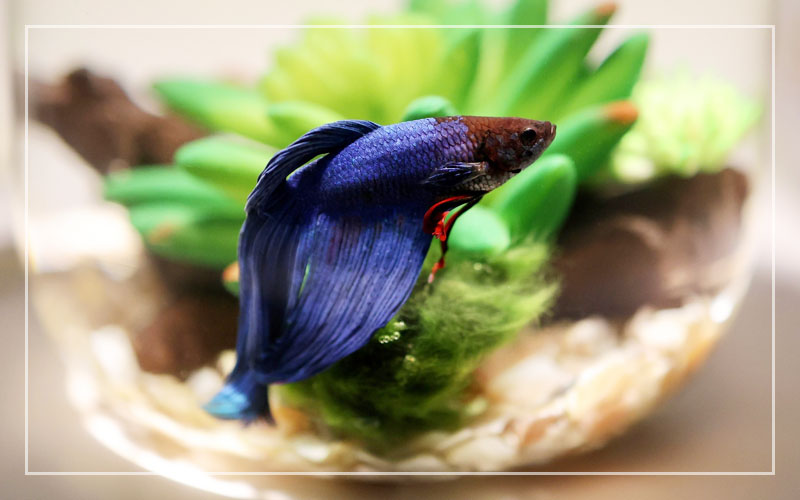 There are few community tanks that don’t have at least a pair of Bettas. These are the most gracious and elegant aquarium fish you can find, thanks to their wide tails and fins.

The Blue Betta comes with a unique charm and different variations of blue, including dark and light shades in varying patterns. Some Bettas have dark blue heads with lighter bodies, while others have blue bodies with whitetails.

You can also find color mixes in blue Bettas, which can include shades of green, red, and orange if you’re interested in more color variation. Bettas are good for community tanks, although Betta males can get feisty and territorial towards each other. 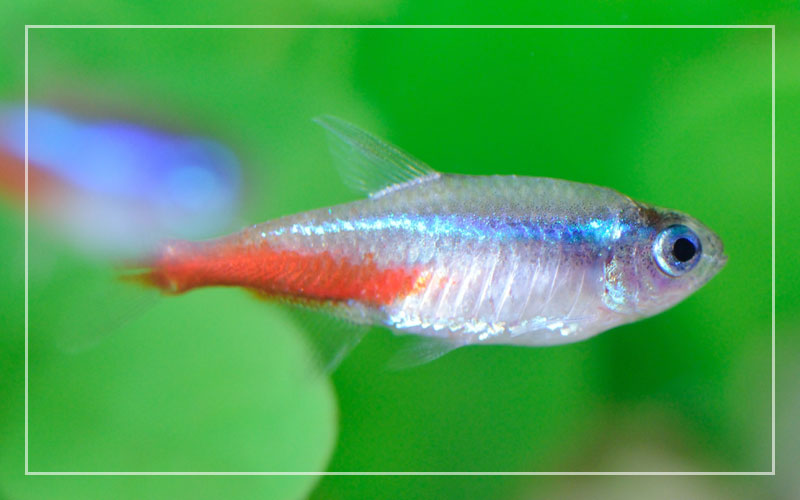 Neon tetras are small, energetic, and colorful and make for great additions to your community tank. Their small bodies display 2 dominant colors – red and neon blue. The blue comes in one solid stripe traversing the body from mouth to tail laterally. The red comes in one solid patch that covers the rear portion of the abdomen and engulfs the tail.

Neon tetras grow up to 1.5 inches and live around 5 years in optimal conditions. Neon tetras are calm and docile as a shoaling species and do well in groups of 10-12 members minimum. They also resort to schooling behavior when scared or threatened.

You should never pair the Neon tetras with fish large enough to eat them because they will. 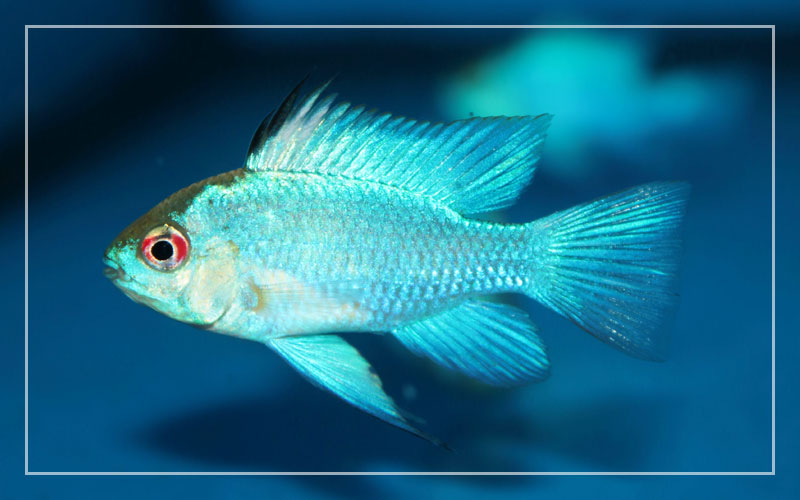 The Electric Blue Ram is a Cichlid and a perfect option if you’re looking for docile, adaptable, and calm fish. They can integrate within any fish community so long as their tank mates share their friendliness. The Blue Ram displays several base colors like blue, gold, and orange.

The blue ones also display metallic nuances, making them sparkle in the light. They are omnivores and can grow up to 2-3 inches, depending on their environmental conditions, diet, and gender. 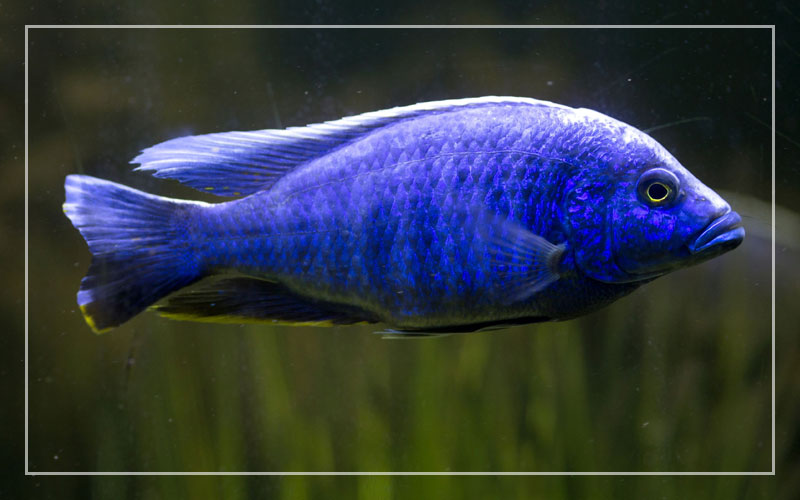 If you’re a fan of predator fish, the Electric Blue Hap is the next best thing. The fish’s appearance speaks volumes about its biological and behavioral orientation. The long, thick body displays a well-developed dorsal fin, covering the entire spine from nape to tail.

The Blue Hap showcases a prolonged head with a wide mouth, a trapezoidal caudal fin, and wide eyes that are either brown, black, or dark blue.

As part of the Cichlid family, the Blue Hap doesn’t go too well with small or timid fish. It’s not particularly aggressive, but its predatorial nature often gets the best of him. The fish can grow up to 8-10 inches, with males being larger and more colorful than the females.

With a life expectancy of up to 10 years, this fish is ideal for single-species tanks primarily. 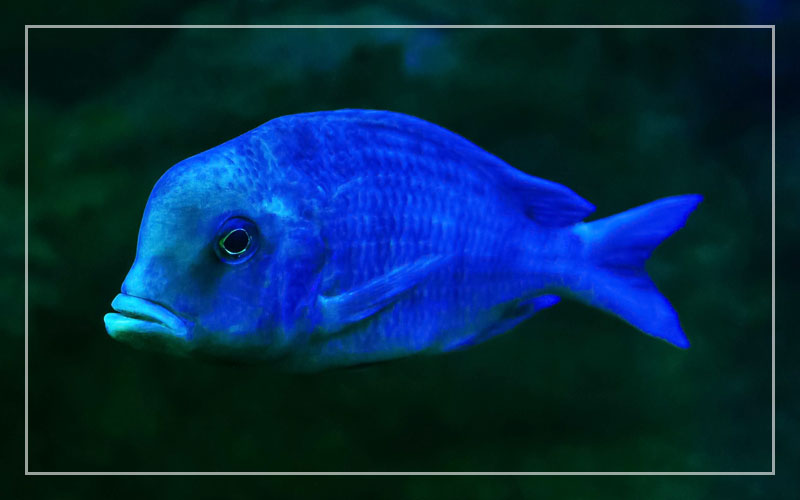 If you’re after a more exotic blue fish, the Dolphin Cichlid is your best bet. This bulky Cichlid displays a heavy body with a prominent forehead and thick lips. The fish will also come in light blue nuances with little color variation throughout the body, while the head is often dark grey.

Size-wise, Dolphin Cichlids can reach around 20 to 25 inches in size, with some species being larger than others. This is a carnivore, so you can’t really match it up with smaller fish species.

Dolphin Cichlids are best kept in single-species tanks, especially since they require a lot of space to feel comfortable. One Dolphin Cichlid may need around 100 to 125 gallons of water to remain healthy and active in the long run. 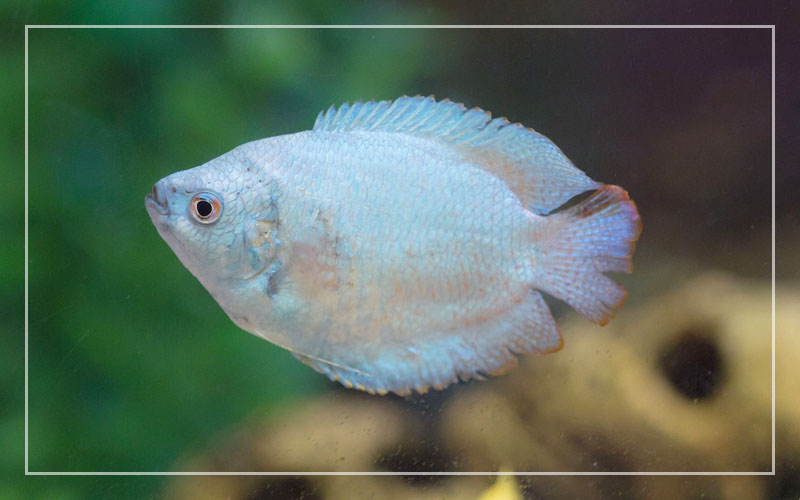 The Blue Dwarf Gourami comes in 2 dominant color variations: neon and powder blue. They grow up to 3 inches and never display clean colors. Most Gourami fish showcase striped patterns, mixing their blue nuances with green or red stripes and spots. They have stock bodies with identical dorsal and abdominal fins covering more than half of their bodies.

Despite the fish’s relatively small size, the Blue Gourami requires at least 15 gallons of water for itself. This makes it difficult to keep it in community tanks, but not impossible, so long as you provide the fish with a heavy-planted habitat.

Just don’t house them with flashy or energetic fish since male Gouramis may see them as competition and become aggressive. 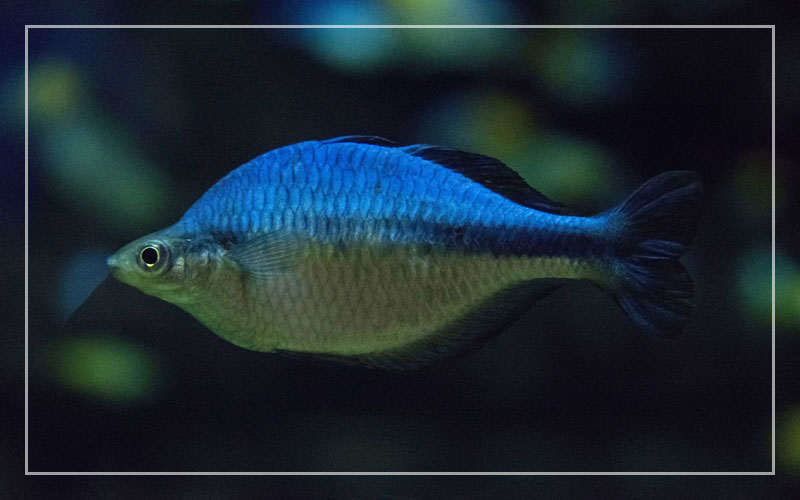 The Lake Kutuhu Rainbowfish (the turquoise rainbowfish) can grow up to 5 inches, but it will remain generally smaller in captivity. It has a varying body shape, ranging from long to stocky, with a pointy head and a trapezoidal caudal fin. Its dorsal and abdominal fins are smaller, growing from the fish’s mid-section to its tail.

The fish’s base color is blue with iridescent variations, providing the Kutuhu with rainbow colors under bright light. This is an omnivorous and peaceful species but can exhibit high levels of energy translating to a more jittery behavior. This means that Kutuhu’s presence may scare off more laid-back and slow-moving species. 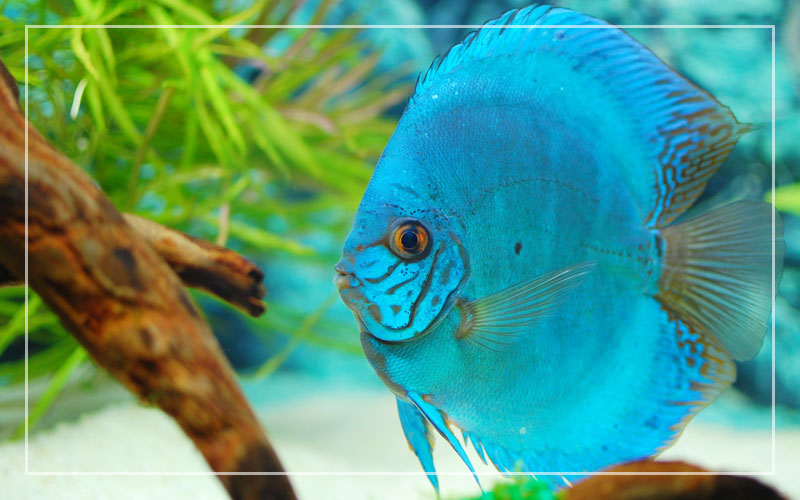 The Blue Discuss fish comes with disk-shaped body, short tail, and large and round dorsal and abdominal fins. This blue variation displays an incredible variety of color patterns, from spotted blue with red and green shades, to dark blue with black stripes and red fins. The Blue Discuss fish can grow up to 8-8.5 inches and requires a lot of space to feel comfortable.

This fish species is more demanding in terms of care and maintenance, which is why I don’t recommend it to beginners or even intermediates. You should keep the fish in groups, but you can also introduce it to community tanks with other peaceful and friendly species. 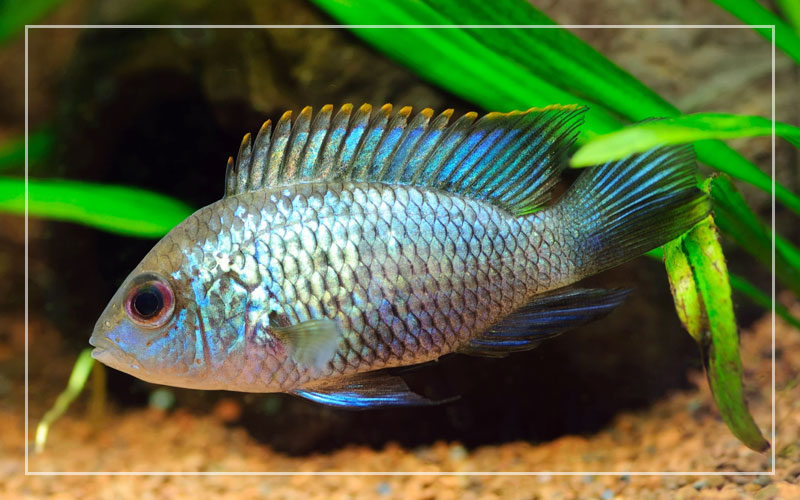 The Blue Acara Cichlid is similar in appearance to the Electric Blue Hap, although it doesn’t display the same predatorial, mean appearance. This Cichlid has a long body with a trapezoidal caudal fin and a dorsal fin covering its entire spine. It comes in several blue variations, often with metallic glows and green or purple nuances.

This species can grow up to 6-7 inches and requires around 30 gallons of water to thrive and remain comfortable over the years. It’s an easy-going fish and rather well-behaved compared to many other Cichlids. The Blue Acara can live up to 10 years in captivity with proper care and adequate maintenance.

If you love bluefish, this list provides you with great options for your community tank. Just be wary of the fact that not all species are compatible with each other. Learn as much as you can about your preferred fish species to avoid incompatible mix-ups, which may cause problems in the long run. 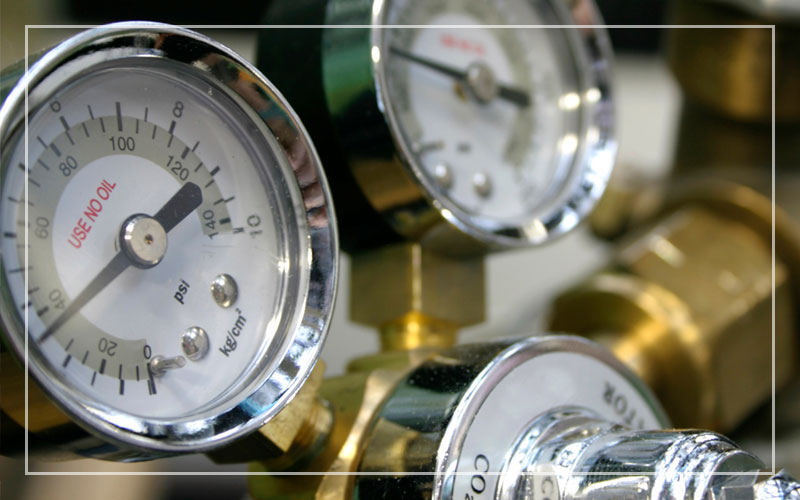 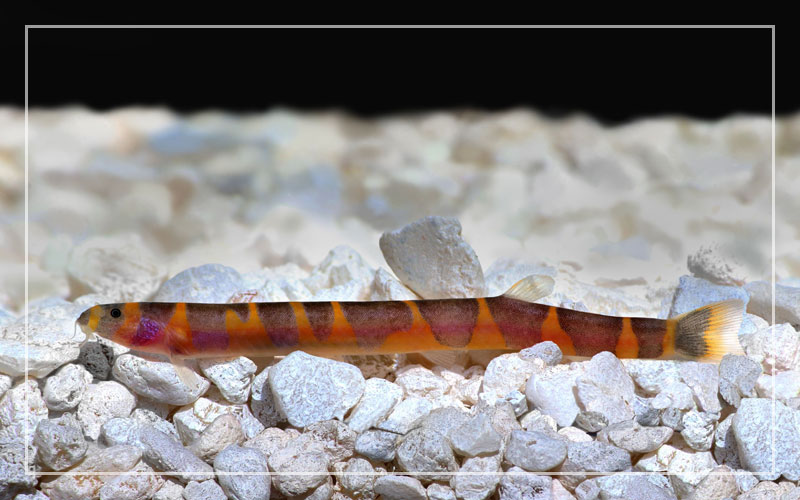 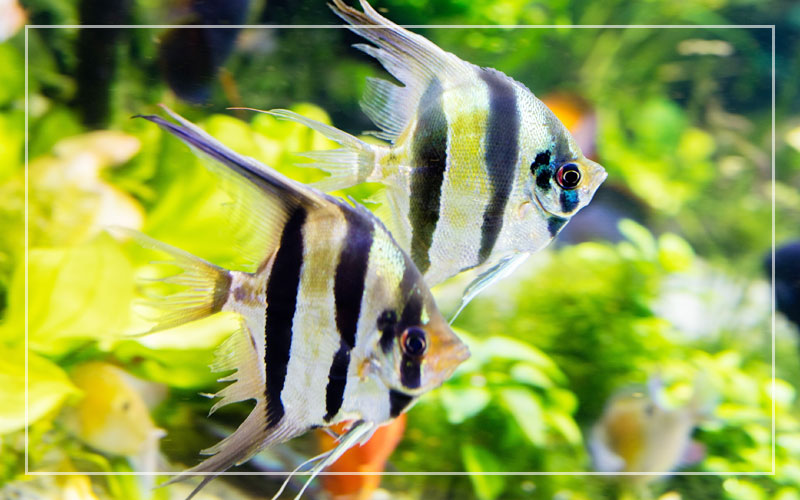 15 Angelfish Types You Should Know About 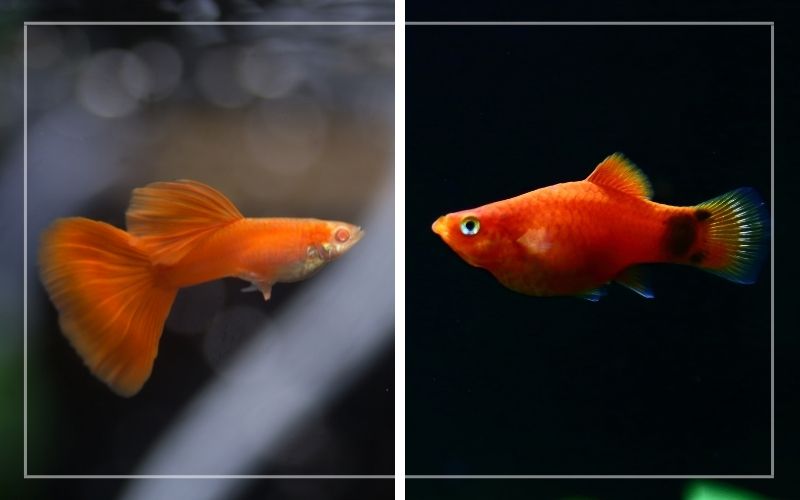 Platy Fish vs. Guppy Fish – What is the Difference?