Home » Freshwater » Why Goldfish Staying at Bottom of Tank?

Goldfish are popular tank fish thanks to their pattern diversity, personality, and long lifespans.

These fish can live close to 20 years with proper care, a balanced diet, and impeccable water conditions. However, despite their hardiness, they can sometimes struggle with health issues that could turn deadly fast.

This is common among tank fish. Most parasitic and bacterial infections will turn deadly without proper care and immediate assistance.

When it comes to saving your goldfish’s life, early treatment is vital, which bears the need for early diagnosis.

Fortunately, your goldfish will let you know if it doesn’t feel well. The fish’s behavior will change as it refuses food, stays in hiding, becomes lethargic, etc.

Today, we will discuss the goldfish’s tendency to swim or stay at the bottom of the tank.

Behaviors like these are often indicators of a problem that needs solving fast before getting out of hand.

Reasons Goldfish is Laying on the Bottom

It’s not abnormal for your goldfish to lay on the tank’s bottom occasionally, but that only happens for short periods of time. If the fish displays this behavior too frequently or for prolonged periods of time, you may need to look into the issue.

There are several reasons why goldfish might be hiding at the bottom of the tank:

Fish stress is common among all species, and it almost always carries the same signs. The fish may refuse food, avoid other fish, and remain in hiding for long periods of time.

Stressed goldfish may also appear more lethargic or aggressive towards their tank mates.

Unfortunately, the fact that the goldfish is stressed tells you nothing about the causes. You need to investigate those separately by looking for other misplaced behaviors or physical signs.

The causes range from mediocre to serious, with the potential to turn deadly fast.

Goldfish require stable water parameters to remain healthy and active in the long run. The problem that most novice aquarists face is having to deal with the goldfish’s natural predisposition towards producing poop.

These are extremely messy fish, and the larger they are, the more waste they will produce. Having several goldfish in the same tank can aggravate the situation fast.

Naturally, having a filter is a must since the filter contributes to a cleaner and more stable aquatic environment, but don’t rely on your tank equipment to do all the work.

The filter will only remove water particles and oxygenate the water, but that’s not enough to stabilize your goldfish’s environment. You also need to perform water changes and vacuum the substrate occasionally.

How often you need to perform tank maintenance varies greatly depending on your situation.

The more fish you have, the more tank cleaning you need to perform. I would suggest changing around 10-15% of your goldfish’s water weekly unless the situation demands otherwise.

You may even perform one water change every 2 weeks if your fish’s environment is more stable overall.

Also, don’t forget to vacuum the substrate to remove excess food leftovers, dead matter, and fish waste. Otherwise, these will decay in the tank, changing the water chemistry and affecting your goldfish’s behavior and health in the process.

Goldfish are not aggressive fish. They can be slightly territorial and grumpy at times, especially towards smaller fish, but they are generally peaceful and easy-going.

Pairing them with larger and more aggressive species can force them to retreat to safer areas. If the goldfish has hiding places available, it will take cover until the situation cools off.

If not, you may see it laying on the substrate in an attempt to evade the aggressors.

You should always pair goldfish with fish of similar size and demeanor to avoid unwarranted aggression. The consequences of continuous aggression and tank tension go beyond behavioral changes.

Your goldfish may suffer physical injuries due to poking, and their constant state of stress could lower their immune system.

It won’t be long until the goldfish will become vulnerable to diseases and infections that could put its life at risk.

If your goldfish lives in a community tank, consider some of the following fixes:

Goldfish will experience similar health issues to most other tank fish. These include Ich, swim bladder disease, kidney issues, etc.

They may also experience a variety of bacterial, fungal, or parasitic infections, depending on factors like infections, poor water conditions, poor diets, and so on.

Many of these disorders are contagious, and most will kill your goldfish if untreated. The problem is that some of them only display visible symptoms in advanced stages, rendering the treatment almost obsolete.

Fortunately, you can detect the disease earlier if you know what to look for. The first signs that something’s wrong are visible in the fish’s behavior.

If your goldfish displays hiding behavior, lethargy, poor appetite, changes in coloration, or visible body lesions, you need to act immediately. Most conditions will heal given proper treatment in a healthy and stable environment.

You may need to use specific medication, depending on the disorder’s profile, which means you need to discuss with a specialist in advance.

Just remember that quarantining the fish is necessary to protect the rest of the fish population just in case the disease is contagious.

These chemicals are common killers in the fish world due to how a closed aquatic environment works.

You see, fish eat, live, and poop in the same habitat. This isn’t necessarily an issue in an open environment, but it can become a problem in an enclosed setting like a tank.

Here, food residues and fish waste accumulate on the substrate and decay, eliminating ammonia and poisoning the water.

This chemical will affect your fish immediately and will even kill them in high-enough concentrations.

When faced with dangerous levels of ammonia, your goldfish will first display signs of ammonia stress which may include difficulty breathing, erratic swimming, poor body coordination, lethargy, laying at the bottom of the tank, etc.

When ammonia poisoning sets in, the signs will become more alarming, including red or bloody gills, signs of suffocation, body lesions, secondary infections, hemorrhage, and even coma and death.

Fortunately, you can prevent all these issues by acting as soon as your goldfish starts displaying any worrying signs.

Remember, acting fast will improve the chances of your goldfish recovering with minimal downsides. The problem is that ammonia-related tissue damages are irreversible, so prevention remains your most useful tool.

You can prevent dangerous ammonia buildup by:

You should also verify your tank’s ammonia content every 2-3 days if necessary since the level should remain 0.

Do Goldfish Sleep on the Bottom?

Yes, they do. Goldfish only sleep in short sessions, typically 10 to 30 minutes at most, and almost always will rest at the aquarium’s bottom during the nap.

Since they’re diurnal fish, they will sleep most at night, but daytime napping isn’t out of the question either.

However, it’s important to learn how to differentiate between sleeping and sick fish since they can sometimes display similar behaviors. If the fish is sleeping, you should see it floating with its head lower than the tail, near the substrate.

Your goldfish will never turn sideways, upside-down, or pointing with their tail towards the water’s surface when sleeping. These are generally signs of sick or even dead fish.

You should also verify your fish’s sleeping pattern. The goldfish will sleep around 8-12 hours per day in short sessions, most of them during nighttime. If the goldfish displays exaggerated sleepiness, something’s not right.

Why My Goldfish Can’t Swim Up?

This may be a sign of early swim bladder disease, which is a common condition among fish.

The disease is more widespread among goldfish and bettas, and it almost always comes with similar symptoms.

The treatment is generally simple and will allow the fish to make a full recovery in most cases. Some of the potential treatments include increasing water temperature, using antibiotics, feeding boiled peas for added fibers, and fasting.

These will generally provide the fish with immediate relief and reverse the condition fast.

While it’s normal for your goldfish to spend some time at the bottom of the tank, it shouldn’t do that very often.

If your goldfish lays on the substrate too often or for too long, look for other abnormal behavioral changes.

If the fish is sick, it will always showcase a multitude of behavioral changes, including erratic swimming, refusal to eat, unwarranted aggression, lethargy, and others.

The good thing is that most fish conditions can be cured with proper treatment and early detection.

However, prevention remains the most effective tool for dealing with any fish health disorder in the long run. 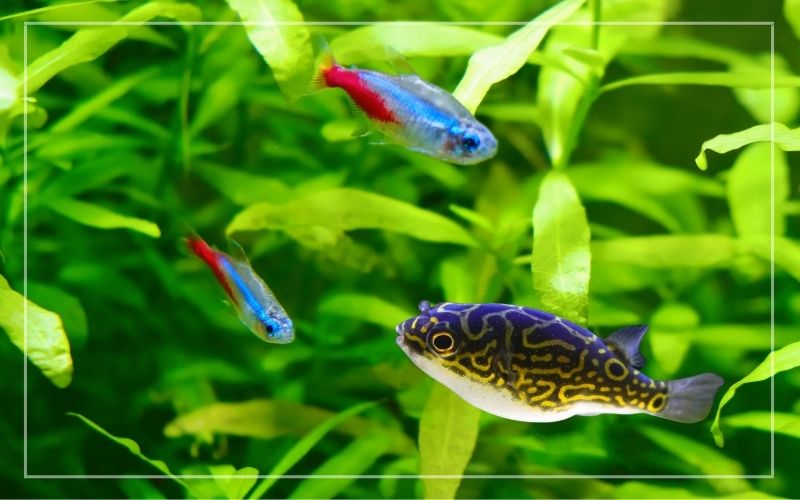 Dwarf Puffer and Neon Tetras – Can They Live Together? 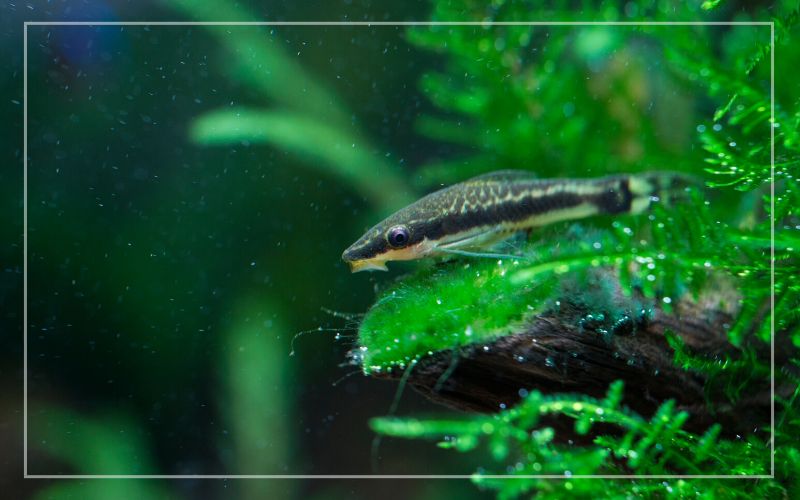