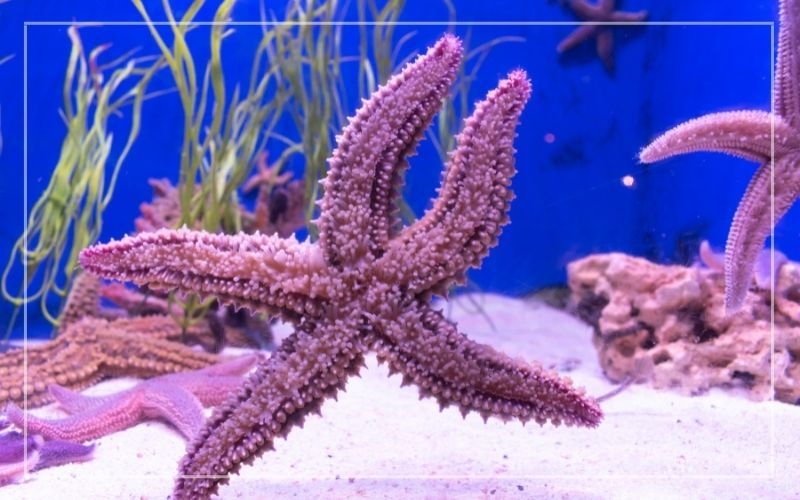 Starfish can help you add color and interest to your marine aquarium. However, most species are notoriously difficult to keep.

It’s common for aquarium starfish to die in less than a year after being introduced to the tank. But it doesn’t have to be that way!

The most common cause of death in aquarium starfish is starvation. Learn how to feed your pet correctly, and its lifespan won’t suffer!

Many new aquarists don’t know how to feed their sea star pets properly. It’s a common misconception that starfish can survive off algae and detritus in the tank.

However, that’s not true. In this article, I’ll teach you more about the proper diet for your starfish. Keep reading to learn how to keep your starfish well-fed and thriving!

How do Starfish Feed?

Starfish, despite their name, are not fish at all. They’re actually invertebrates, so their biology is different from other aquatic animals you might know.

They have mouths, like other animals. They also have two stomachs but no teeth. This makes for a freakishly unique way of eating.

Here’s how they do it:

Because they have no teeth, starfish can’t chew their food. Instead, they digest the food outside their bodies. The starfish positions itself above its prey and uses its legs to prop itself in place.

Then, it opens its mouth, which is located at the center of its underside. Then, the starfish pushes its cardiac stomach out of its body through the mouth canal.

The stomach surrounds the food and starts secreting digestive enzymes, which turn the food into a soupy mush. Once digestion is done, the starfish pulls its stomach back into its body.

Next, the pre-digested food travels into the second stomach (pyloric stomach) to complete the digestion and absorption of nutrients. Pretty cool, but also horrifying!

What do Starfish Eat in the Wild?

There are over 2,000 starfish species in the wild. So, there’s a lot of variety in a starfish’s natural diet.

But most species commonly kept in the aquarium hobby are carnivores or omnivores. In the wild, such starfish consume smaller, slow-moving organisms and a variety of plant matter.

Here’s a list of what carnivorous starfish eat in the wild:

Omnivorous starfish eat all the above foods in the wild. They also consume a variety of plant matter, including:

Many carnivorous and omnivorous starfish species are also scavengers and detritivores.

But remember, starfish can’t survive off of scraps. The majority of their food should still come from protein sources!

What to Feed Starfish in Aquarium?

Starfish kept in captivity should eat as close to their natural diet as possible. The ideal diet for your starfish depends on the species you keep.

Some starfish feed mainly off coral, while others consume various meaty foods. You’ll have to identify your starfish species first.

Most starfish commonly kept in the aquarium hobby are carnivorous, so you should focus on meaty foods they’d eat in their natural environment.

Unfortunately, there are no specially formulated feeds for starfish. So, you’ll have to keep a variety of foods on hand.

You can’t go wrong with the following proteins. These are easy to find, and virtually all starfish enjoy them:

You’ll find seafood like clams, mollusks, and squid in your local supermarket, ready to serve. You can buy these foods in most pet stores or even online when it comes to corals, snails, shrimp, and worms.

No need to worry about feeding live foods. As scavengers, starfish eat primarily foods that are either slow-moving, ill, or dead.

How to Feed Your Starfish?

You can feed your starfish a variety of commercially frozen seafood. But remember always to thaw the food first.

If you’re feeding things like shrimp or squid, chop the food into smaller pieces. Starfish can’t chew or bite, so you want the food to be small enough for their stomachs.

The mussels, shrimp, and other foods you offer should be raw, never cooked.

You’ll need a pair of aquarium forceps for feedings. You’ll use these to put the food at the bottom of the tank.

Place it beside the starfish or in an area with lots of open room where your starfish can grab the food quickly.

The starfish will “smell” the food with the receptors in its skin and make its way towards it. Ensure other fish in the tank can’t get to the food first.

Starfish are slow-moving and might miss feeding opportunities if they have to compete for food.

Feed one piece of food at a time and use the starfish’s cues to gauge the ideal portion size.

Does the starfish consume the food very rapidly? Drop in one more piece. Has the starfish slowed down? Then it’s probably had enough food.

As for feeding frequency, this will depend on the species you keep. Some starfish eat a bit daily, while others can be fed weekly.

Remember to do your research so as not to overfeed or underfeed your pet.

Most starfish are carnivorous. However, omnivorous starfish exist. Such species consume both meaty foods and aquatic plants such as algae.

So yes, some starfish do eat algae.

These algae-eating starfish are very rare in the aquarium hobby. But you can find a few species that will nibble on the algae growing in your tank.

Some of the most popular ones are:

Asterina and Fromia species, in particular, derive most of their diets from aquatic plant matter such as coralline algae, regular algae, diatoms, and phytoplankton.

However, even these starfish are not exclusively algae eaters. These species will still consume tiny worms, zooplankton, and certain bacteria.

Yes, most starfish species eat corals and, thus, are not reef-safe. The most coral-hungry species include the Crown of Thorns, the Chocolate Chip, the Red Knob, and the Feather Starfish. Avoid keeping these in a reef tank.

Maybe you already have a reef tank but don’t want to miss out on the beauty of starfish.

In that case, consider some of the following reef-safe species:

Just a word of caution— most of these species don’t typically attack corals but might still consume them if they get hungry.

Most of these species are also around 10 inches or larger, so they might not be suitable for small aquariums.

Starfish prefer slow-moving prey like clams or mussels. Most fish are too large and fast-swimming to become prey for a starfish.

That being said, some starfish species will sometimes ambush and eat smaller fish.

This behavior is typical in the Green Serpent Starfish and other similar, large species. To be extra safe, only keep large sea stars alongside larger fish.

Smaller, less aggressive sea stars don’t hunt for live fish. However, most starfish are scavengers and will consume dead fish when the opportunity arises.

You can even feed your starfish small bits of raw fish if you want. Most species will gladly eat that.

Do Starfish Eat Each Other?

Yes, cannibalism in starfish might happen more frequently than we think. We know that starfish babies have no reservations about eating their kin.

A study published in 2021 closely documents the cannibalistic tendencies in juvenile sea stars.

But it doesn’t stop there! Remember, starfish are primarily carnivorous and opportunistic feeders. It’s not unheard of for larger starfish attacking and eating their smaller counterparts.

Most starfish kept in the aquarium hobby are either omnivorous or carnivorous.

These aquatic animals have a big appetite for protein-rich foods and should consume consistent meals daily to weekly, depending on the species in question.

The best foods to include in a sea star’s diet are clams, oysters, mussels, snails, shrimp, squid, and marine worms.

You should give your starfish a combination of these foods weekly. Some starfish species will also consume algae and corals. Some sea stars might even prey on smaller fish and starfish in the tank. 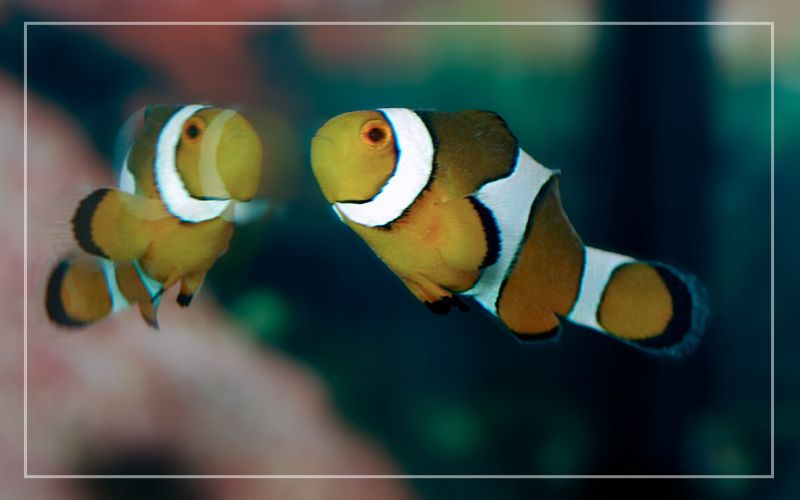 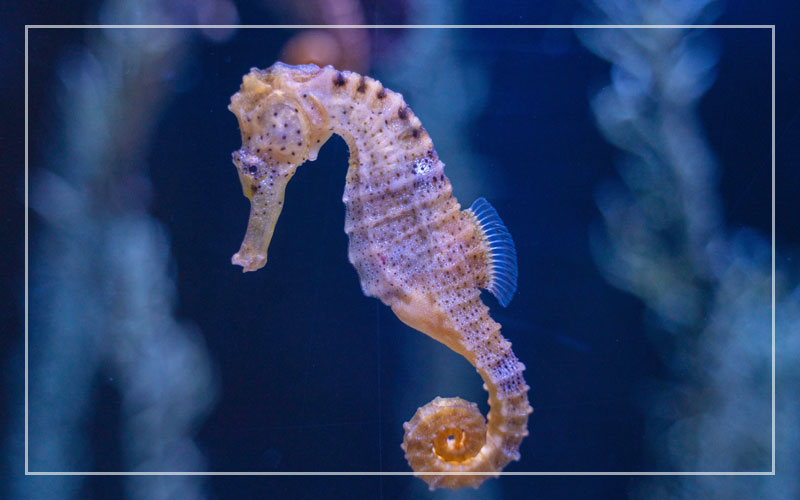 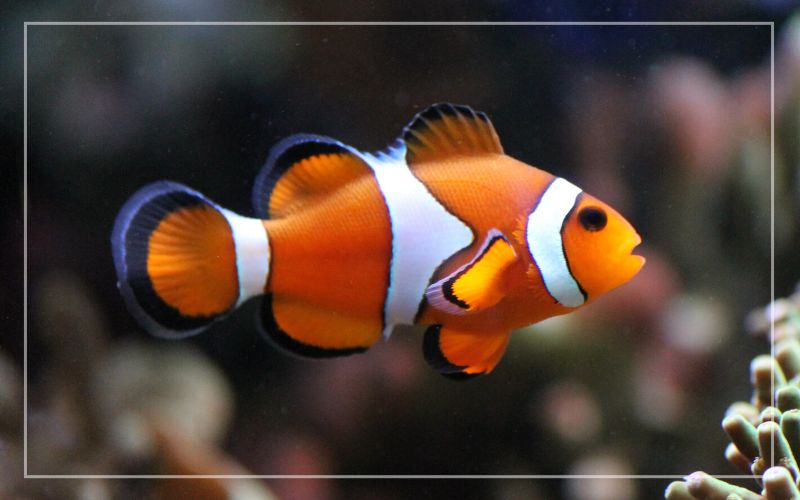 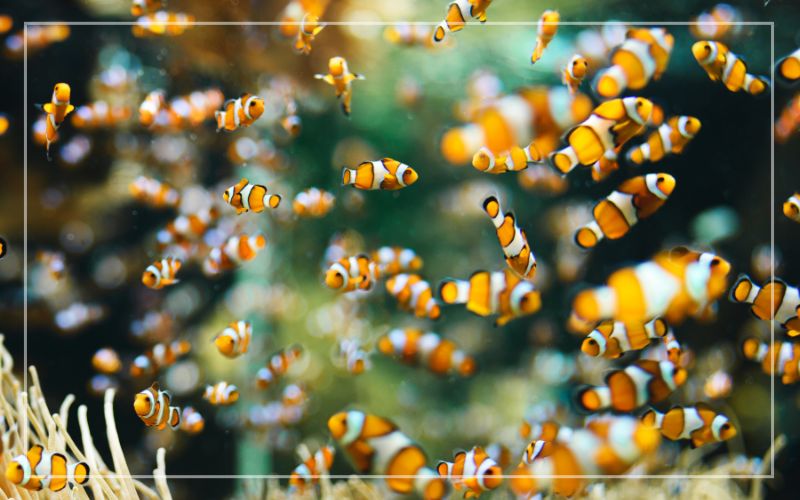