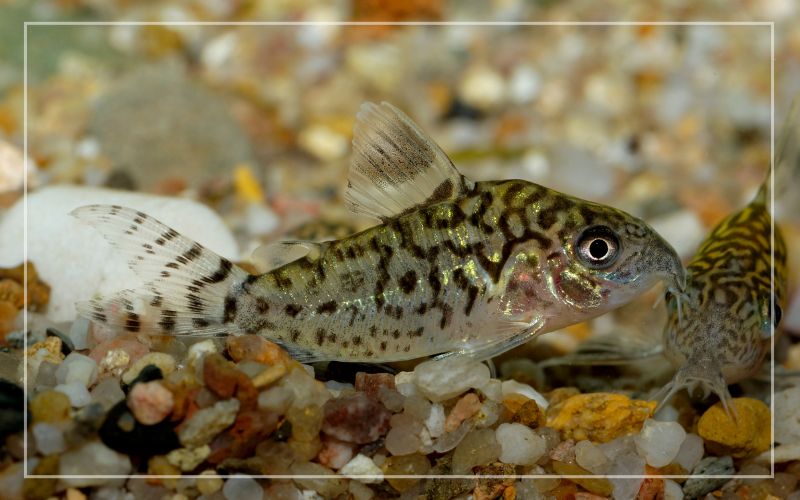 You may have heard that Corydoras are hardy and resistant to disease, and this is true, but only partially. These catfish are known as intestinal breathers, which is another way of saying that they breathe atmospheric air when necessary.

This is a good ability to have when living in poorly oxygenated environments.

So, the fish does have some pretty useful evolutionary features that allow it to survive and even thrive in subpar conditions.

This being said, even catfish sometimes struggle with health issues, the peskiest one being fin rot.

So, let’s talk about it!

The fish will display an array of symptoms that tend to progress along with the disease’s advancement.

Here are some signs to look for:

In advanced stages, the catfish will lose its fins and even the tail. The fish will certainly die if the disease spreads to the gills or head.

This means that the condition itself tends to become more severe in poor water conditions, where the risk of infection is higher. It also means that the disorder can aggravate fast and take unexpected turns, many of which are fatal.

Immediate treatment is needed to contain and address the disease properly.

What Causes Fin Rot in Corydoras?

You have several potential causes to consider, such as:

All these potential causes show that catfish aren’t safe from fin rot either, despite their perceived toughness and adaptability.

How to Treat Fin Rot in Corys?

Once you have diagnosed the disorder successfully, preferably as soon as possible, to prevent more damage, you can now begin the treatment.

The treatment’s profile depends on the disease’s triggers. In other words, you must first identify and correct whatever’s caused the disorder in the first place.

Here are some of the critical steps to follow:

Follow the recommended treatment for as long as necessary until the fish shows no further symptoms and improves its health status.

The treatment may last for 2 weeks or more, depending on the disorder’s severity and the catfish’s physiological strength.

Remember to remove any activated carbon-based filters, as these can suck in any antibiotic you might add to the water.

Will Corydoras Regrow Their Fins?

Yes, corydoras do regrow their fins, but never to their initial size and shape. The fin itself will regenerate, but not the spine, which will result in an awkwardly-shaped fin.

This is still good, as the fish will regain some of the fin’s functionality which is still better than nothing.

How Long Does It Take for Corydoras to Heal from Fin Rot?

The recovery timeframe can vary between 1 and 4 weeks, depending on the disease’s severity. It’s also worth noting that some fish recover while others don’t.

You can usually tell the difference when closing in on the 2-week mark. If your fish shows no signs of improvement until then, you might consider euthanasia as the best course of action.

Yes, but it’s not worth taking the chance. Fin rot can get pretty aggressive, depending on the fish’s immune system and how weak the victim is.

If your fish is stressed, has secondary infections, or is old and weak, the disease will progress fast and can end in a swift death.

Even if that doesn’t happen, your fish can still lose its affected fin, despite overcoming the disorder completely. And we’ve already discussed how fins never regenerate back to their initial state.

So, you should always provide your sick catfish with adequate treatment and assistance if you notice any signs of fin rot. Or any other disease for that matter.

Fin rot can make for a scary experience for both you and the fish. Fortunately, the disease is manageable, especially if you detect its presence in time.

Even more importantly, you can reduce the fish’s risk of contracting the disease in the first place.

Provide your catfish with a clean and well-oxygenated habitat, perform regular tank maintenance, and keep it well-fed and stress-free and you won’t have to worry about fin rot.

If the disease does strike, follow my approach and full recovery is guaranteed.