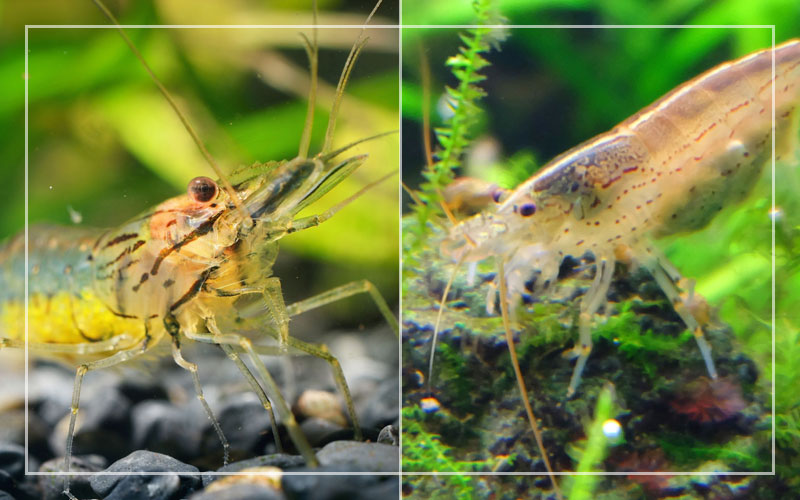 Home » Freshwater » Shrimp » Ghost Shrimp vs Amano Shrimp – What is the Difference?

Ghost and Amano shrimp are some of the most popular shrimp for planted aquariums and community tanks. They’re also often mistaken for one another. They have plenty of things in common. However, there are also some differences you might want to know about.

If you’re thinking about adding these shrimp to your tank, keep reading. In this article, I’ll talk about the differences and compatibility between these species.

We’re now going to take a look at all the major differences between Ghost shrimp and Amano shrimp. I’ll cover everything from appearance and size to diet, breeding, and lifespan. I’m also going to talk about tank setup and water parameters towards the end of this section. So, let’s see how these species compare in terms of:

Both species belong to the same infraorder (Caridea), so there’s no surprise that they look a lot alike. They both have the same elongated body shape, a fanlike tail, and multiple small appendages used for swimming. They also have the same long antennae. It’s quite easy to mistake one for the other. However, some key differences set them apart.

Female Amano shrimp have small, dark-colored dashes that travel alongside the laterals of the body. Male shrimp have tiny dots that are distributed in the same way. Another difference between these species is claw size.

The Ghost shrimp has longer and more powerful claws compared to the Amano shrimp. Finally, despite the Ghost shrimp’s shorter body, its abdomen appears a little longer visually.

Size and growth are other areas where differences become obvious. Ghost shrimp are smaller than their counterparts. An adult Ghost shrimp measures around 0.5-1 inches on average. Some outliers might even reach 1.5 inches in length.

An Amano shrimp will average 1-2 inches in length. The overall body size difference between the two isn’t that big, but it’s still noticeable. Compared to its counterpart, the Amano shrimp also exhibits stronger sexual dimorphism. Females of the species are larger than the males, and they average 2 inches in length. Males, on the other hand, average only around 1 inch.

These two species also have rather different eating habits. The Ghost shrimp is a true omnivore and will consume anything it can get its claws on. Just like in the wild, they’ll go about their day scavenging for food. And since beggars can’t be choosers, they’ll be happy with almost anything. Fresh food, frozen food, dried food, fish poop, you name it!

If you aren’t sure where to start, you can feed them pellet foods and larvae. They’ll also help themselves to the dead aquatic plants and any algae growing in your tank. They also like shrimp pellets, frozen bloodworms, daphnia, and blanched green vegetables.

Ghost shrimp need a low-fat diet, so avoid overfeeding them on bloodworms or high-fat flake or pellet foods. As for frequency, this will depend on how many Ghost shrimp you keep in the tank. Feeding them every other day or even every day works well. It takes a bit of trial and error to get the right portion. You should feed your shrimp a quantity of food they can eat within four hours.

Amano shrimp lean more towards green plants. Their diet is less varied. They’re not called the “world’s best algae eater” for no reason. If given the choice, this shrimp would go all out on algae every day. There’s no type of algae they don’t like. If you get string algae, hair algae, black beard algae, the Amano shrimp will help you get rid of them.

They also eat dead plant matter shedding from your aquatic plants. If there aren’t enough greens to go around, you can also supplement your Amano shrimp’s diet with dry flakes, fish or shrimp pellets, algae wafers, blanched spinach, and zucchini. If you don’t get a lot of algae growth, you should feed your Amano shrimp at least every other day.

There’s a world of difference between the breeding habits of Ghost shrimp and Amano shrimp. Ghost shrimp are very easy to breed. That’s part of the reason why they’re so cheap and abundant.

They don’t need anything special and can breed just fine in captivity. They also breed fast. Female Ghost shrimp lay up to 30 eggs after each insemination. The young shrimp don’t take too much to hatch. Likewise, they can reach their full adult size in just one month.

The Amano shrimp, on the other hand, is challenging to breed. Few people manage to do it. If you’re interested in breeding your shrimp, this species is not a good choice for beginners. Amano shrimp has a complex reproductive cycle and can only breed if all the suitable conditions are met.

It’s too difficult to replicate the full range of its natural habitat, so breeding them in captivity is almost impossible. The Amano shrimp needs both freshwater and saltwater at very specific times throughout its reproduction and growth.

Amano shrimp larvae need to spend a lot of time in saltwater as they grow. Besides, Amano shrimp take a very long time to reach their full body size. If the glass shrimp grows in up to 5 weeks, the Amano shrimp might need 5 months.

Ghost shrimp have a shorter average lifespan than Amanos. In general, you can expect a Ghost shrimp to live from 6 months to a year. However, under the right conditions, Ghost shrimp can sometimes live up to 2 years. It’s worth noting that Ghost shrimp are highly sensitive to their environment and water parameters. Without proper care, they can easily get sick and die.

You could say both species are compensating for their breeding rates. Since Ghost shrimp breed so much and so quickly, it should come as good news that they have a shorter average lifespan. On the other hand, if you can’t breed Amanos in captivity, at least you get to enjoy them for a little longer.

There’s a lot to cover when talking about tank requirements. We’ll have to take a look at tank size, lighting, and decorations, as well as water parameters (including temperature, pH, and hardness). So, let’s take them one by one:

The general rule here is to provide at least 2 gallons worth of tank space for every single shrimp. This applies to both Ghost shrimp and Amanos. They’re roughly the same size, after all. So, if you want to keep one small group of either species, a 10-gallon tank is more than enough. But an even bigger tank is always better, especially if you’re thinking about breeding the shrimp.

Ghost shrimp and Amanos don’t have any special lighting requirements. If you only keep shrimp in the tank, adding lights is entirely up to you. They can be healthy in both high and low-light environments. If you keep shrimp with other fish, however, you’ll have to add extra lighting. The same applies if you have a planted aquarium. Without direct light exposure, the plants won’t grow.

Decorations are extremely important for both shrimp species. These shrimp love hiding and they spend a lot of time doing so if given the opportunity. It’s crucial to provide a suitable environment for them. Besides, some of the decorations you add to the aquarium might even help with the water quality.

All types of plants will keep ammonia levels low. Driftwood also helps purify the water and promotes the growth of good bacteria. You can mix and match different decorations to create a unique look. Plants, driftwood, rocks, gravel and pebbles, small caves, anything goes!

Ghost shrimp need neutral to slightly alkaline water with a pH between 7.0-8.0. They’re adapted to a wide range of water hardness and can survive in soft to hard water (3 to 10 dGH). The ideal water temperature ranges from 65 to 75°F. Ghost shrimp can also live in higher temperatures (up to 85°F), but this can lead to molting problems and infections.

Amano shrimp can live in slightly acidic to slightly alkaline water with a pH between 6.0-7.6. Like Ghost shrimp, Amanos can live in soft to hard water but tolerate a higher range of general hardness (4-14 dGH). Amanos also have a slightly wider ideal temperature range, between 60 and 80°F.

Can Ghost and Amano Shrimp Live Together?

Absolutely! Some people believe that mixing different shrimp species in the same tank is a bad idea. I think it depends. Some species get along very well, while others, not so much. Ghost shrimp and Amanos are one of the lucky pairs. They have similar water parameters, so it’s easy to house them together.

Being omnivorous, they also have similar dietary requirements. Their personalities are also pretty similar. These shrimp are curious and peaceful for the most part. Ghost shrimp can get cranky and aggressive when they live in cramped tanks. If there are multiple hiding spaces and there’s enough space, this is a non-issue.

I should also mention that Ghost shrimp are opportunistic feeders. They will eat anything from fish poop to plants, to other shrimp. If the food is small enough, that is. Since Amano shrimp are a little larger, they’ll be safe. Ghost shrimp are bad hunters and don’t like putting up a fight.

Maybe, but this doesn’t happen often. The preferred diet of Amano shrimp focuses mostly on algae and other plant matter. As long as they have enough of their favorite foods, Amano shrimp don’t go out of their way to hunt down other shrimp.

They certainly wouldn’t attack and eat Ghost shrimp adults, even if the food was scarce. Amanos don’t kill other large adult shrimp. If you see an Amano nipping at another dead shrimp’s body, it means that the shrimp diet long before the Amano found it.

The story’s a little different when it comes to smaller shrimp though. It’s not unheard of for Amanos to eat baby Ghost shrimp or other newborn shrimp species. Above all, Amanos are scavengers. So, anything small enough to eat, they’ll eat. Providing multiple hiding spots for your shrimp can prevent this.

Both Ghost and Amano shrimp look quite similar. They’re close in size, although Amano shrimp are usually bigger. Ghost shrimp are smaller, but also stronger and with longer claws. Both species have somewhat similar water parameters and diets. Ghost shrimp breed very easily and they have a shorter lifespan, while Amanos live 2-3 times as long but are nearly impossible to breed in captivity.

Their personalities are also similar. Both shrimp are calm and non-confrontational.  As you can see, both species have their pros and cons. You can choose either one of them or both. As long as you put them in a roomy tank with plenty of hiding spots, they can get along just fine. 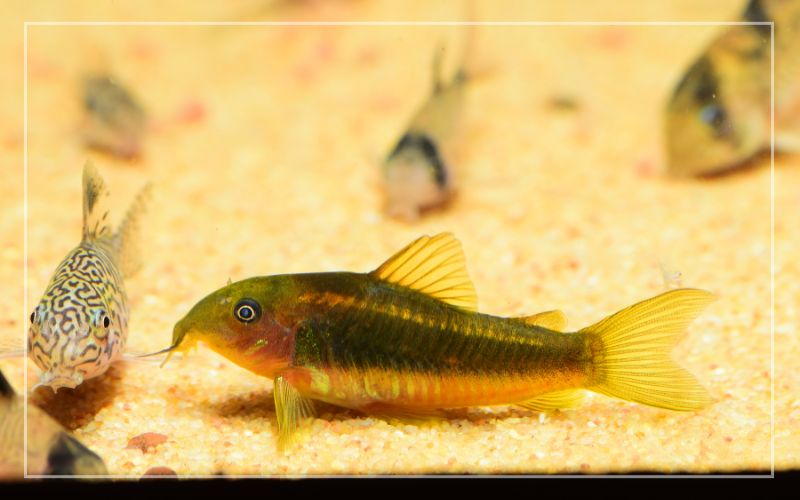 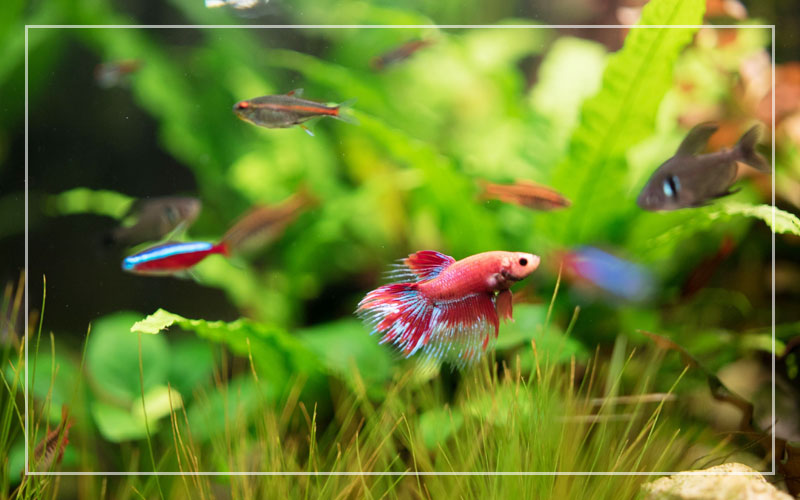 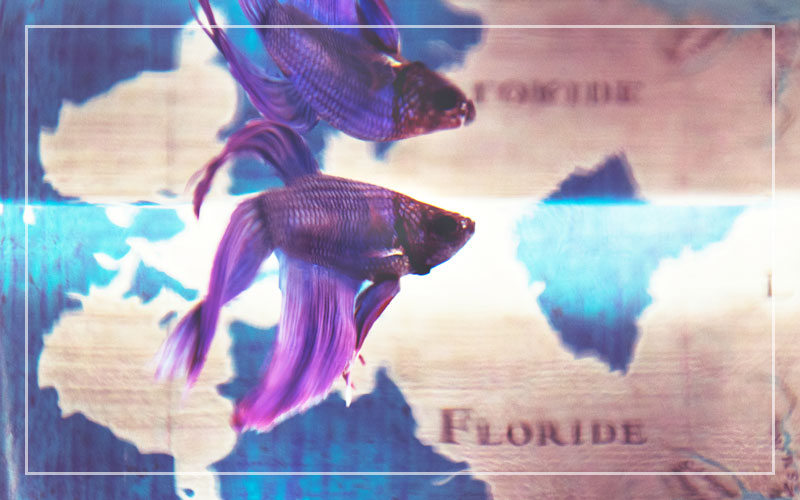 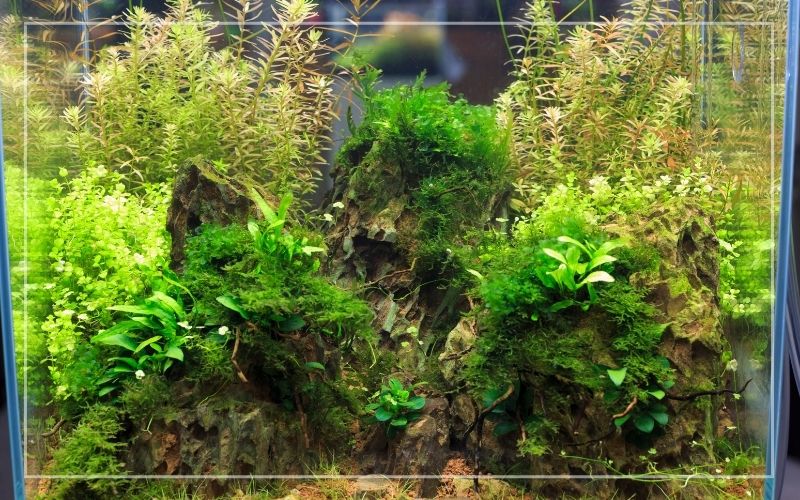